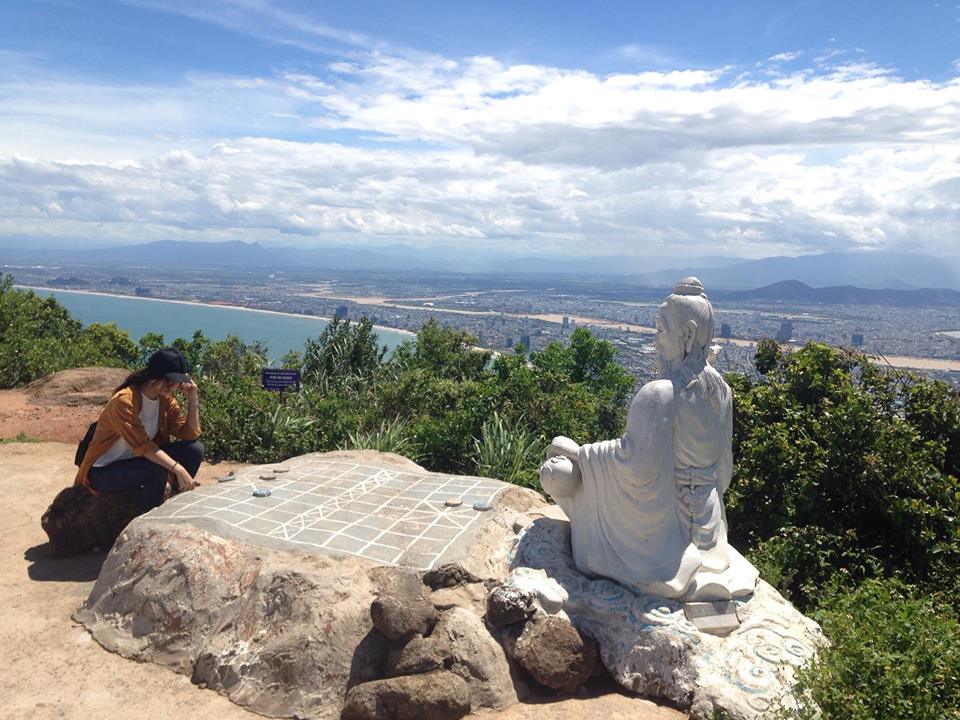 Ban Co Peak is an interesting tourist destination, where visitors refreshing not to be missed when traveling Son Tra Peninsula, Da Nang. Son Tra peninsula is a popular place from time immemorial, is a prime location so long ago it has been mentioned many history books.

According to legend, his two fairy chess sitting on Son Tra mountain for several days but still inconclusive. Then one day, the fairies flying down to the beach to bathe, while neglecting to look fairies frolic, an opponent he was first defeated. Annoyed, he stomped feet first onto the rock, kicked the board into the sea, and then ascended to Heaven. According to legend, people have put a statue of Indra sat alone inside chessboard-shaped rocks and whether you have the name from there. People here are also related that often descend first to bathe, play up the mountain also known as Tien Sa. And Son Tra is not only famous for its legend of the fairies descended position but also extremely popular legend about the game of his first two.

To reach the area of ​​Son Tra Ban Co peak, you have to climb a steep staircase segments, steep. The road leading up the mountain winding, including a cruise where you can experience the beautiful scenery and dreaming of Son Tra Peninsula. The road followed the arc sometimes poetic coastline with pristine beaches and the passage through the luxuriant green canopy. The sun of the sea breeze mixed in slightly moist forest trees makes the journey up you have a lot of emotion.

Experiencing supply line from the foot to the top of Ban Co peninsula, all tired carried away by the immense space as place of Elysium. Standing on a high point of 700 meters, which can see the whole Da Nang. In the distance is a busy bustling city with distinctive buildings of the city and nine bridges spanning the Han River famous.

The road to the top of Ban Co

Standing in this place everyone wants to scream out loud, rang true distance, and then melt into the vast space, endless, dispel worries and sadness, everyday. Come to this place, just you and nature stay, everything seems positive noise will vanish in a moment.

Son Tra Ban Co Peak is probably the most beautiful early morning, when the city was still dormant not awake, nature has also stirred peninsula, the sun glimmering on the other side of the mountain.
Or an afternoon rush, sun took off, around the peninsula, cool wind in tears to the top of Son Tra Ban Co at dusk, trying to diffuse the sun's pink waters, magical scenery. On sunny days, you can look across the city. If the weather is foggy, around you will be clouds and between first place Penglai scene. Maybe so, but the first he chose this place for a walk, as the old chess still each transmission.

A little to be themselves

Come to Ban Co Peak, to the Son Tra, to Danang if in your heart there is a little curious, a little want to experience, explore a little bit, a little sense of conquest and A little to be themselves.